The Vertical Cadastre - Utility and Definition 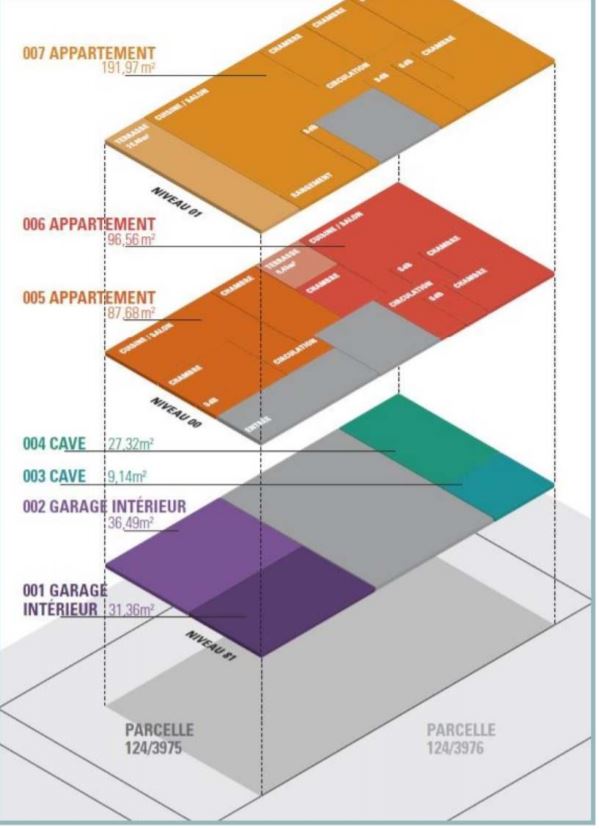 Each share of a private portion is associated with a share of the common portions, expressed in thousandths of co-ownership. This share represents the participation of each co-owner in the costs of conservation, maintenance and administration of the common parts of the building.

Each co-owner thus has the right to take part in the management decisions of the co-ownership by participating in the votes at the general meetings. Each vote expressed by the co-owner, represents his share of thousandths of common parts.

The vertical cadastre is the detailed descriptive state of the division of the private lots and the common parts, of a building under the regime of the co-ownership.

It contributes to a better identification of the various parts of the building and thus to the primordial security of real estate transactions. The texts giving it a binding character are the law of 19 March 1988 on "Land registration in matters of co-ownership" and the Grand-Ducal Regulation of 22 June 1988 concerning advertising in terms of co-ownership.

The descriptive statement of division includes the table which lists for each private lot, its cadastral designation, its nature, its useful surface and its share, as well as the plans:

the 1/250 or 1/500 site plan places the condominium building in relation to the land parcels,
1/100 scale floor plans locate each private lot inside the building and show its configuration, its delimitation, its cadastral designation, its nature and its useful surface,
1/100 scale cutting plans.

The cadastral designation refers to the table and to the descriptive plans of division and makes it possible to identify unequivocally all the privative lots of the same building in co-ownership. Its constituent elements are:

example:
The letter U designates the single block of a condominium building or the single staircase of a block. The number 81 corresponds to the level of the 1st basement, 82 to the 2nd basement and so on. examples: apartment 012 AA 03: private lot n ° 12, in building A, accessible by stairs A of the building, located on the 3rd floor. cellar 056 AB 81: cellar private lot n ° 56, in the building A, accessible by the staircase B of the building, located on the 1st basement.

DETERMINATION OF QUOTES AND SURFACES

The private surface is the area within the horizontal boundaries of a private lot. Inscribed on the floor plans, it is verifiable by all the co-owners and serves as a basis for the calculation of the share. The useful surface is equal to the privative surface, deduction made of the external accessory parts, such access, balcony, courtyard and terrace. The share of common portions associated with each private lot is a function of the surface, the nature of the lot and the height under ceiling. The private area is multiplied by a weighting coefficient that reflects the nature of the lot and its economic value (apartment: 1.0 / balcony: 0.4 / cellar: 0.5 / ....) And a reduction coefficient, if the ceiling height is less than two meters.

The sum of the weighted areas thus calculated shall be adjusted so that the sum of the resulting shares is equal to one thousand thousandths (1000/1000 th).

By clicking on "I agree", you authorize the use of cookies to ensure you get the best experience on this website.